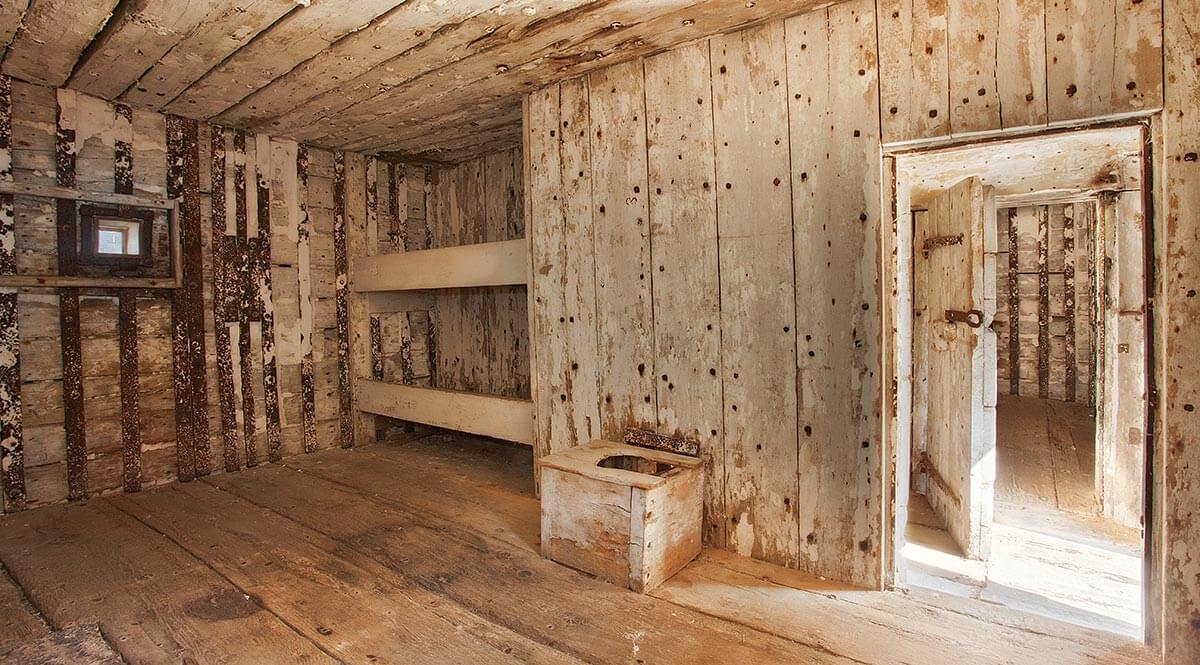 The Old Gaol House has limitations of authentic 18th-century architecture and is not wheelchair-accessible. Steep stairs and narrow doorways may present difficulties for those with physical disabilities.

There is a wheelchair-accessible kiosk with information about this historic site.

Service animals are welcome to visit the Old Gaol. We follow the Federal government’s guidelines on service animals. The NHA welcomes dogs that are individually trained to perform a task or work for a person with a disability, but please leave pets at home.

About the Old Gaol

Nantucket built its first jail in 1696 on Vestal Street. In 1805 taxpayers decided to spend $2,090 (roughly the cost of building a whaleship at the time) to build a new, sturdier penal facility also on Vestal Street. Opened in 1805 and dubbed the “New Gaol,” the wooden structure represents colonial architecture with exceptional reinforcements.

The New Gaol was constructed using massive oak timbers with iron bolts running the length of the walls, iron rods across the windows and heavy wooden doors reinforced with iron.

The solidly-built jail forced prisoners to come up with creative escape plans. Archival material held at the NHA Research Library contain many accounts of successful and unsuccessful prison-breaks, including one of a 15-year-old boy who crawled out the chimney flue, and of a prisoner who had a key delivered to his second floor window by a woman using a block-and-tackle pulley system constructed for the purpose.

1933 saw the last prisoner housed in what is now known as the “Old Gaol.” The town closed the property and deeded it to the Nantucket Historical Association in 1946.

Learn more about the history of the Old Gaol

Visit the Old Gaol just as it stood in 1805. Hover shows a crowd gathered in front of the jail in 1893 when the Commission on Prisons inspected the jail. Frederick Parker, Keeper of the Jail, is standing in the upper door-way. (P7150)

Explore the cells on both floors and imagine what it was like to be incarcerated on Nantucket in the 19th century.

Hear the stories of some of the prisoners, such as William Chadwick (GPN1754), convicted of embezzlement in 1884. He served his term in a cell comfortably furnished by his family where he read and made crafts, such as lightship baskets. Prisoners were often allowed freedoms and doors were not always locked.

Learn about the House of Corrections, moved from the Quaise Asylum in 1855 and situated next to the Old Gaol. It was used for debtors, habitual drunkards, mentally ill, and juvenile prisoners—also used as a workhouse where debtors could ply their trades to pay their bills. It was no longer needed by 1933 and dismantled in 1954.